Last week UMBRELLA Communication Team from BISER – Bałtycki Instytut Spraw Europejskich i Regionalnych represented our project in a beautiful city of Lisbon for the 2019 edition of the European Maritime Day!

During the opening session on 16th May we’ were welcomed by the Fernando MEDINA, President of the Municipality of Lisbon and Ana Paula VITORINO, Minister of Sea, Republic of Portugal.

They were followed with the speech from Karmenu VELLA, European Commissioner for Environment, Maritime Affairs and Fisheries. Afterwards, we took part in the panel: What lies ahead? What is at stake for the oceans?

👉#EMD is the annual meeting point for Europe’s maritime community to network, discuss and forge synergies. 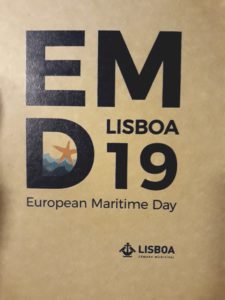 was on blue #entrepreneurship, research and innovation for healthy seas and oceans.

👉Among many workshops we participated in one on the #bluegrowthregional cooperation Smart Specialisation and the Emerging Blue Sectors. Acting together in a regional ecosystem organized by the Errin (European Regions Research & Innovation Network) & POMORSKIE Regional EU Office with the representatives of Polish Maritime Cluster mentioning their cooperation with our #UMBRELLA Interreg South Baltic project, Instytut Morski w Gdańsku,#SouthNorway EU Office – Leader of the #PERISCOPE – North Sea Region Programme and Mistral MED Interreg project.

Building on the competence of a region, this workshop showcased how investments in blue growth have a positive cross-sectorial impact on the entire regional innovation ecosystem. Speakers presented strategies and gaps in RIS3 as well as tools and methods for knowledge transfer in the blue economy.

Other workshops we attended were:

The discussion was about the existing gaps, barriers, potential solutions, and business and innovation opportunities, for the prevention & reduction, monitoring & quantification, recovery and transformation of marine litter.

During the Handover Ceremony on 16th May, the EMD2020 host was announced – next year’s event will take place in Cork.

he project UMBRELLA is partly financed from the Interreg South Baltic Programme 2014-2020 through the European Regional Development Fund.

You can find out more about which cookies we are using or switch them off in SETTINGS.

Files (the so-called "cookies") are IT data, in particular text files, which are stored on the website user's end device and are intended for using the website pages.

Cookies usually contain the name of the website they come from, the storage time on the end device and a unique number. Cookies are used for the following purposes:

Detailed information on the possibilities and methods of handling cookies is available in the software (web browser) settings.

Strictly Necessary Cookie should be enabled at all times so that we can save your preferences for cookie settings.

If you disable this cookie, we will not be able to save your preferences. This means that every time you visit this website you will need to enable or disable cookies again.

This website uses Google Analytics to collect anonymous information such as the number of visitors to the site, and the most popular pages.

Please enable Strictly Necessary Cookies first so that we can save your preferences!